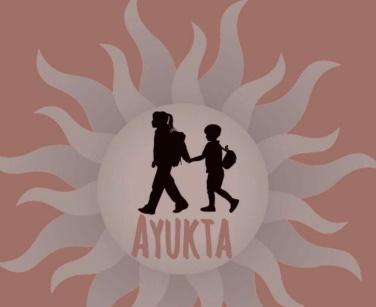 Ayukta etymologically signifies ‘the sun’, and like the meaning this community service also propagates that. The online platform, which began with a sibling duo, Akanksha & Aman Priyaraj by teaching 2-3 kids from the underprivileged strata, comprising of their house help’s kids with a vision to deliver ‘sound quality education’ soon expanded to the friends of those kids who did not have the access to it, unlike the urbane and elitist kids. These young minds wanted to study, but the parents could not afford the additional burden of private coaching, let alone the school fees, and hence either dropped out of schools due to parents not earning or were forced to start earning themselves to feed and survive the aftermath caused by COVID. Thus, germinated the concept of an E-platform that would reach out to such kids from diverse backgrounds and geographically far off located cities, to spread the goodness around unfiltered, pretty much as the sun would every morning.  The dynamic duo created an online page on Instagram to garner the attention of common people, who could volunteer in taking classes for the children whole heartedly without any agenda or motives involved. Within 48 hours, they were flooded with requests to affiliate themselves with this noble cause.  To add to it, this idea also caught the eye of powerhouses Anushka Sharma (actor) & Rhea Kapoor (producer) under the ‘Good Influencer Project’ and was personally promoted by them to cater to wider audiences using their status.

It is a completely non-profit, non-remunerated community service wherein the volunteers are assigned kids to teach them common subjects, ranging from Nursery to Grade 10. Each volunteer takes a one-on-one personalized class of about thirty to forty minutes via Whatsapp since these families do not enjoy the privilege of upmarket tech savvy apps (Zoom & Microsoft) to ensure maximum attention span and not overload the child with the information. As of today, Ayukta boasts of 100 plus volunteers spanning across the metro cities pan-India with over 80 kids, and the statistics only progresses upwards with each passing day. The team, works as a close knit family and constantly track the growth and learning of every child that belongs to this umbrella with regular updates. They also brainstorm on techniques to advance the skill levels and strive for a holistic development rather than mere textbook knowledge, to prepare these kids as equivalents to others of their generation. As someone, who is also associated with Ayukta, I can proudly say it is an initiative that is here to sustain, and only grow leaps and bounds with the plethora of volunteers that join to cover maximum such kids under its umbrella.

So here’s to a future that truly personifies the essence of Ayukta – bright and sunshine coated.

iThere are no comments

This site uses Akismet to reduce spam. Learn how your comment data is processed.

The Post India is a crowdsourced media company focused on Millennials. With a global reach of over 1 million, we empower and inspire our audience through diverse voices. For us, every voice matters.

The concept was born from the pain of not being able to reach a significant audience as a small but good quality blog. That’s why we created a publishing platform that is free for our writers and readers. The Post India, is fuelled by a community of excellent writers.

Begin typing your search above and press return to search. Press Esc to cancel.